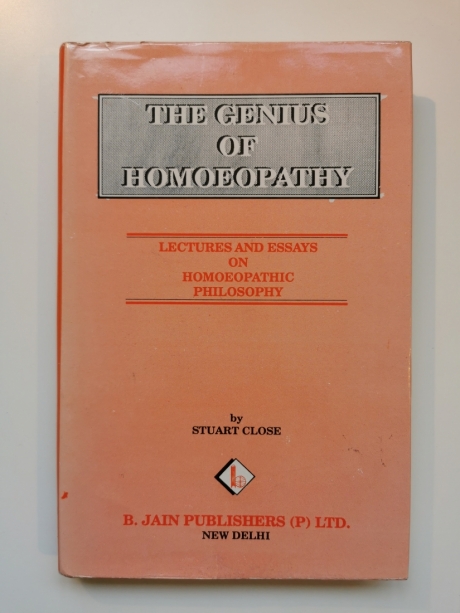 The Genius Of Homoeopathy (Hard Back) by Stuart Close

Lectures and Essays on Homoeopathic Philosophy - HARDCOVER
with Word Index

Many of the articles that make up this book were originally prepared and delivered as lectures for the senior classes of the New York Homoeopathic Medical College.
It discusses Hahnemannian principles from a modern standpoint. The era of therapeutic nihilism is passing away. Thinking men and leaders of mainstream medicine are ready to participate in a scientific discussion of the theory and principles of therapeutic medication from a homoeopathic standpoint. They rightly hold, that the evidence to be submitted should be prepared in such a manner as to comply with the requirements of scientific research.

This book has been compiled with the object of presenting, as attractively as possible, an exposition of the logical, historical anq philosophical principles upon which homoeopathy is based and is an attempt to show, at least suggesively, its relation as a department of general medicine to other sciences.

"A series of lectures delivered at the New York Homeopathic Medical College. Close was a student of P.P. Wells and Bernhardt Fincke. This book is one of the clearest statements about the philosophical basis of homeopathic study ever compiled." Julian Winsto