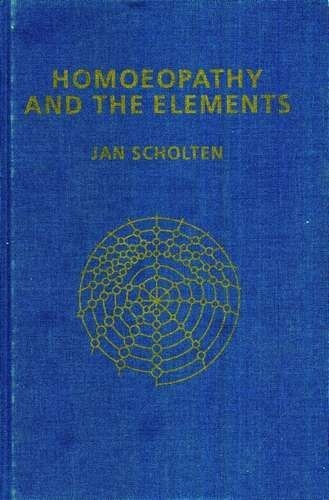 Homeopathy and the Elements (Hardcover)

A huge work on the Periodic Table.
Hardback. 880 pages.
Scholten's second book, Homeopathy and the Elements, appeared in 1996 and attracted much attention. This contains a homeopathic analysis of the elements of the periodic table of Mendeleev. The classification of homeopathic remedies by using the periodic table was named the element theory. Scholten divided the elements into 7 series, corresponding with the rows of the periodic system, and 18 stages, corresponding with the columns of the periodic system.
Each series has a theme. The 7 series contain:
Row / Series 1 - Hydrogen series (Hydrogen and Helium) - theme: unborn and coming into being.
Row/ Series 2 - Carbon series (Lithium to Neon) - theme: individuality and the development of the ego.
Row/ Series 3 - Silicon series (Sodium to Argon) - theme: family and relationships
Row/ Series 4 - Iron series (Potassium to Krypton) - theme: work
Row/ Series 5 - Silver series (Rubidium to Xenon) - theme: creativity
Row/ Series 6 - Gold series (Caesium to Radon and lanthanides) - theme: leadership/autonomy, the 'king.'
Row/ Series 7 - Uranium series (Francium to Plutonium and further) - retirement and intuition
The theme of each series is developed in stages and these are represented by the columns of the of the Periodic Table.
The table itself can be re-represented as a spiral where each wind of the spiral is a series / row. Each spoke is a column.
As the spiral unfolds it can be compared to the self expanding from the inward-looking ego going further out into the vast Universe.